Subcutaneous dissection produces an extremely thin skin flap predisposed to scar contracture and hence a high incidence of ectropion. For access to the infraorbital rim the orbicularis muscle and the periorbita must be split below the infraorbital rim.

The path of dissection deep to the orbicularis oculi muscle includes the pretarsal orbicularis muscle in the elevated skin muscle flap if the skin incision is placed across the tarsus. Motor denervation can critically reduce lower lid tone and diminish vertical lid support.

The step incision starts with a skin flap leaving the pretarsal muscle portion intact before the suborbicularis plane is entered by muscle transsection.
In options 2 and 3 the integrity of the orbital septum has to be meticulously preserved, otherwise there is a risk of vertical lid shortening. The incision through the periosteum for entry into the floor of the orbit is made beneath the infraorbital rim.

The step dissection outlined here is technically easier than the other two methods. It preserves pretarsal fibers of the orbicularis oculi, thereby limiting scarring at the eyelid margin.

Common complications associated with options 1 and 2, such as skin buttonholes, darkening of the skin, ectropion, and occasionally entropion are minimized.

The advantages of the step dissection technique are the imperceptible scar and the ease of extending laterally for additional exposure of the entire lateral orbital rim.

The skin creases around the orbit are evaluated carefully. If a lateral extension of the subciliary incision line is anticipated, it is useful to mark the lateral tail of the skin crease that passes inferiorly. The lateral extension of the subciliary incision always follows the natural crease. If edema obscures the direction of skin creases, one may look at the contralateral eyelid to determine the direction and position of the creases. 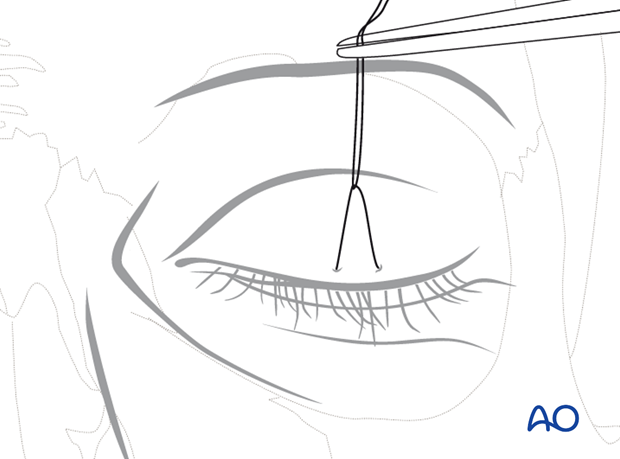 Marking of the incision line is planned just below the eyelashes paralleling the lid margin. The lateral extension runs out into a natural skin crease. It can reach approximately 2 cm past the lateral canthus.
Next, the lower eyelid may be infiltrated using a local anesthetic containing a vasoconstrictor. 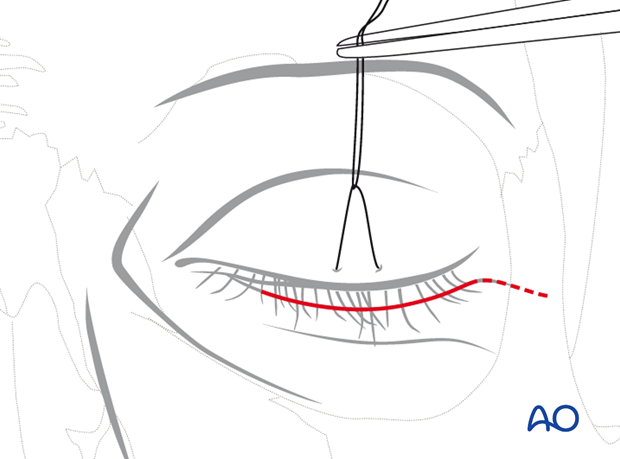 The initial incision is carried through the skin layer only. The underlying orbicular muscle should become visible when the skin incision is completed. A cotton-tipped applicator may be used to elevate the lower eyelashes out of the surgical field while making the incision. 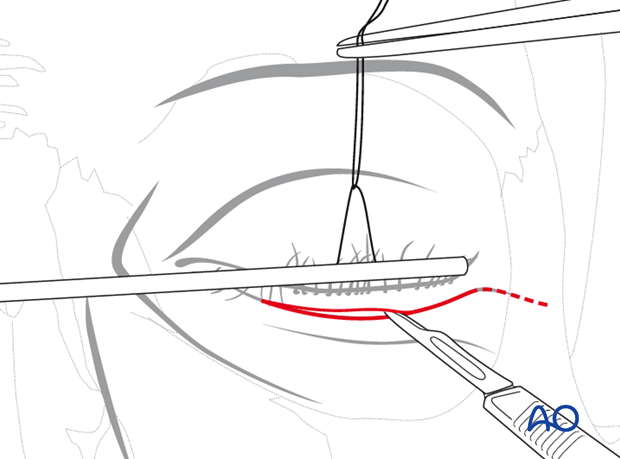 A skin flap over the pretarsal portion of the orbicularis oculi muscle is developed along the entire extent of the incision. 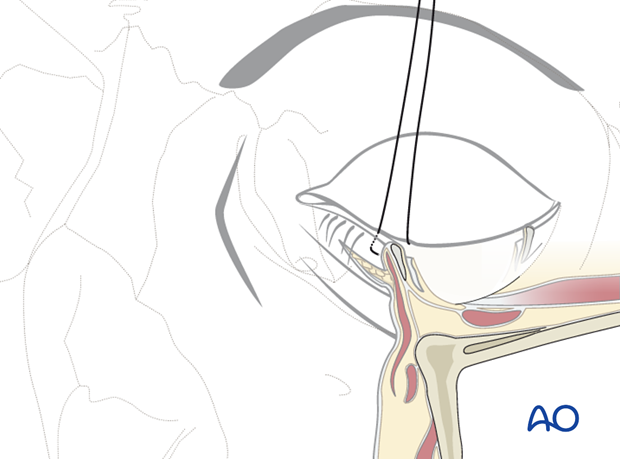 This skin flap goes inferiorly over an approximate distance of 4-6 mm. This is performed by sharp dissection with scalpel or scissors. 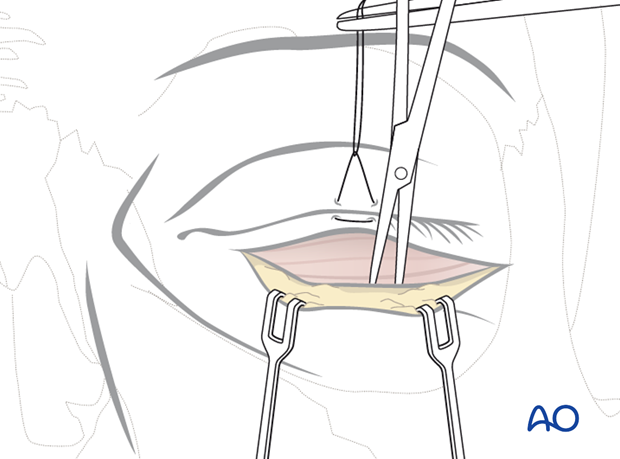 Clinical example shows the separation of the pretarsal skin flap. The intact muscular portion of the orbicularis oculi is revealed.

The approach is continued in stepwise fashion. The orbicularis oculi layer is undermined and a dissection plane between the muscle and the septum orbitale is created.

The suborbicular undermining begins with a slit-like lateral incision of the muscle over the bony infraorbital rim. 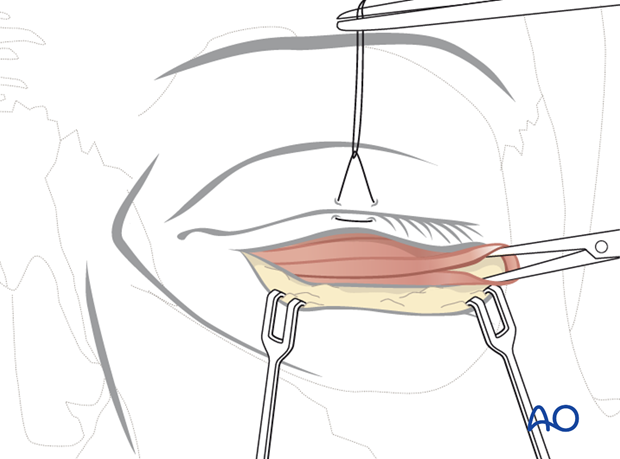 Next, the suborbicular dissection plane is opened by spreading the introduced scissors. This leaves the orbital septum intact. The suborbicular pocket is extended downwards over the anterior edge of the infraorbital rim. 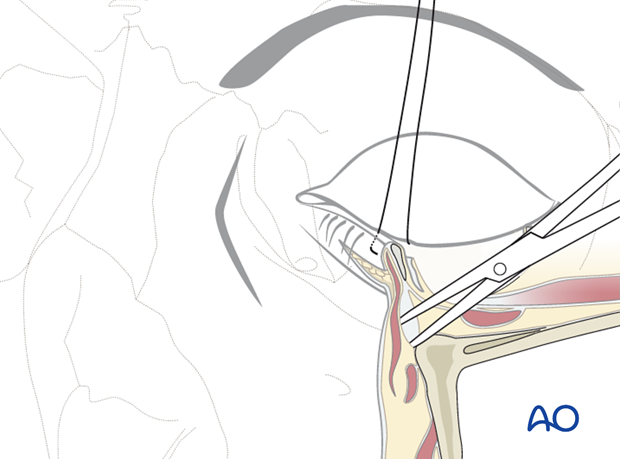 The pocket is extended over the whole lower palpebral region. Finally, the upper portion of the pocket below the tarsus is opened with the spreading scissors. This allows for the step incision of the muscle. 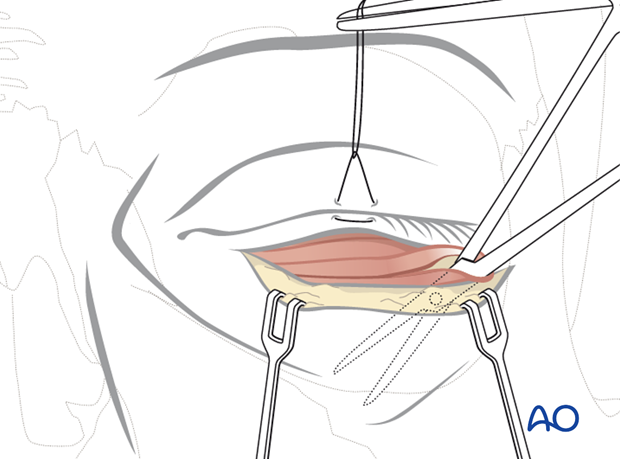 6. Incision between pretarsal and preseptal portions of orbicularis oculi muscle

The remaining orbicularis oculi muscle layer is then separated at the level just below the lower border of the tarsus to complete the step incision. This enables retraction of the lower lid as a skin muscle flap. 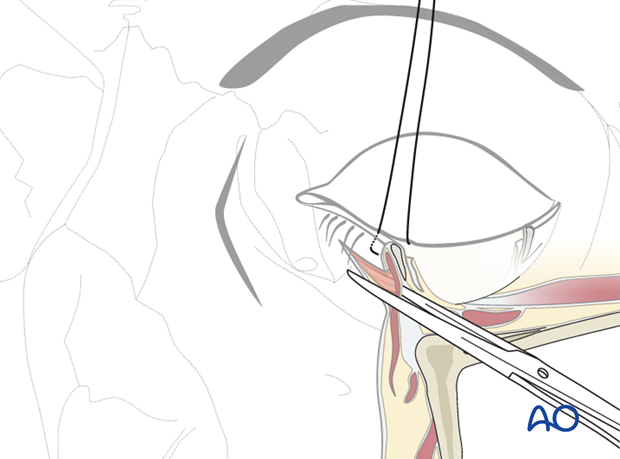 7. Periosteal incision over the infraorbital rim

The skin muscle flap is retracted inferiorly over the anterior edge of the infraorbital rim along its whole horizontal extent.

An incision through the periosteum at this level should avoid the orbital septum and is inclined to the lateral side. 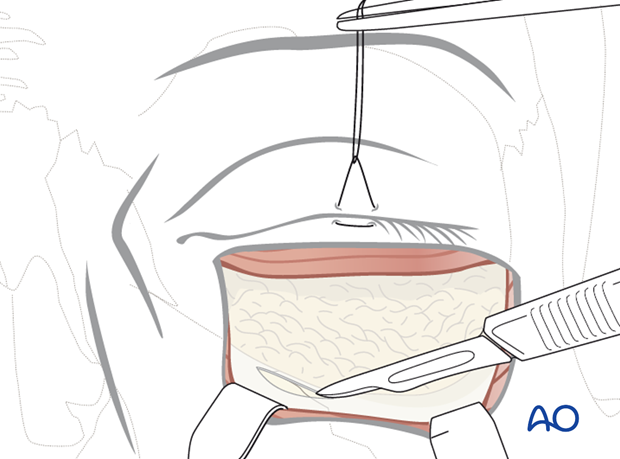 Periosteal elevators are then used to strip the periosteum from the underlying osseous skeleton.
The infraorbital nerve is located below the medial portion of the infraorbital rim and can be approached after the periosteal incision is made. After identifying the infraorbital foramen and the nerve exit zone, the upper facial surface of the anterior maxilla can be dissected in the subperiosteal plane. 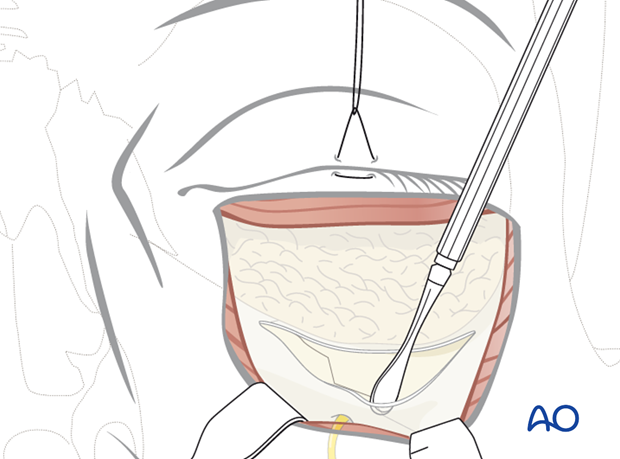 The infraorbital rim is exposed superiorly for the subsequent periorbital dissection. 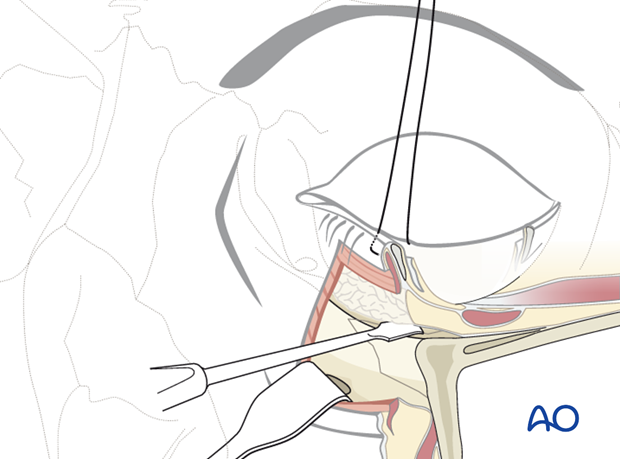 Closure can be performed in two or three layers:

The periosteum is redraped over the bony surfaces and closed with resorbable interrupted sutures. 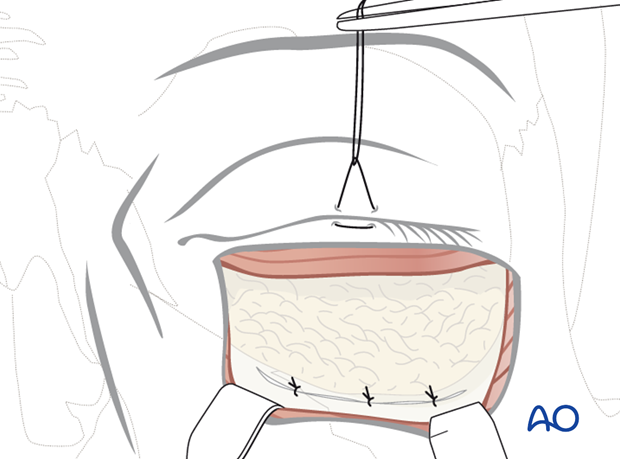 Suturing of the orbicularis oculi muscle is optional in a limited approach. It is recommended if the approach is extended with vertical cuts through the muscle and/or excessive stripping over the zygomatic body.

Resorbable interrupted sutures are placed laterally, in particular when the orbicularis oculi muscle has been cut at this position. 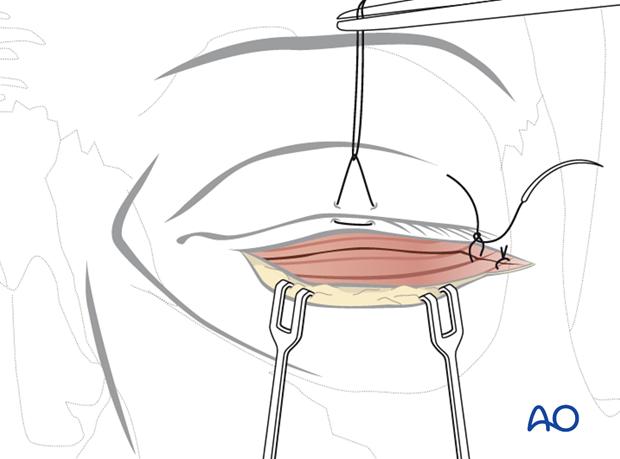 The skin wound is closed with a 6-0 nonresorbable or fast-resorbing suture. Either running or interrupted sutures can be used. 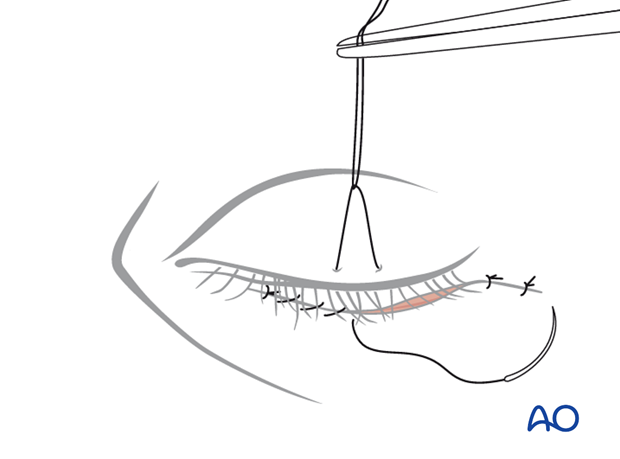 The standard subciliary approach can be extended laterally to provide access to the entire lateral orbital rim to a level superior to the frontozygomatic suture. This access may be used as an alternative to the lateral brow or the upper blepharoplasty approaches.

The incision is extended laterally between 1-1.5 cm in a natural crease (Crow’s feet in the elderly patient). If there is no natural skin crease, the extension can be made straight laterally or slightly inferolaterally. 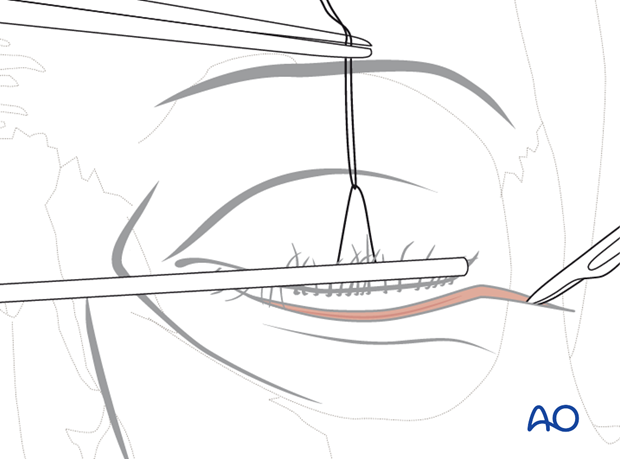 After extending the incision laterally, the orbicularis oculi muscle is undermined over the lateral orbital rim in a superior direction. The dissection proceeds in a supraperiosteal plane and can be extended well above the zygomaticofrontal suture. 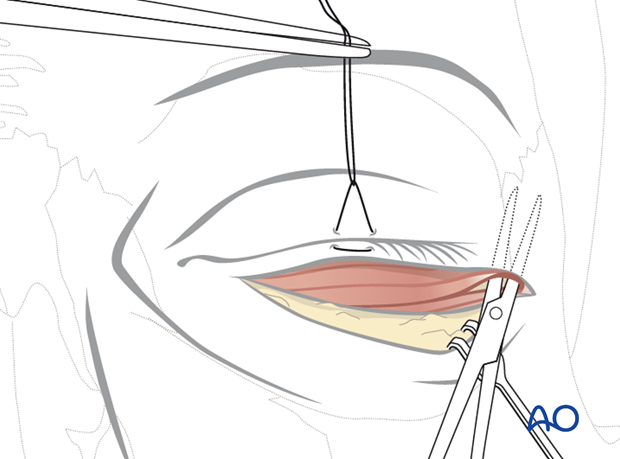 The soft tissues over the lateral orbital rim are retracted superiorly with a small retractor to expose the periosteum. 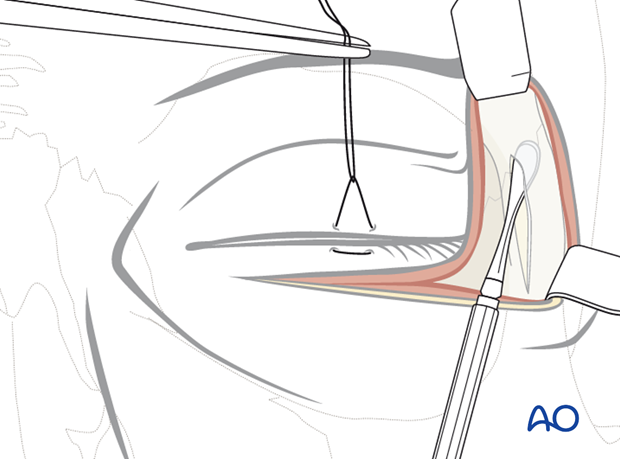 Second, the dissection frees the periorbita over the lateral orbital wall into the orbital cavity.

The lateral canthal tendon will be stripped from its insertions with the dissection of the periorbita. 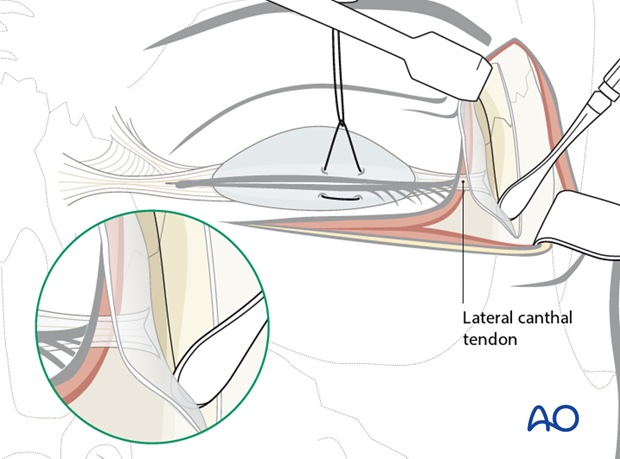 The periosteal incisions over the lateral orbital and infraorbital rim are connected. The periorbital dissection frees the tissues from the lateral orbital wall and the orbital floor to the sphenozygomatic suture line and to the infraorbital fissure. Thus, the inferolateral circumference of the orbital cavity can be exposed from the frontozygomatic suture to the zygomaticomaxillary suture. 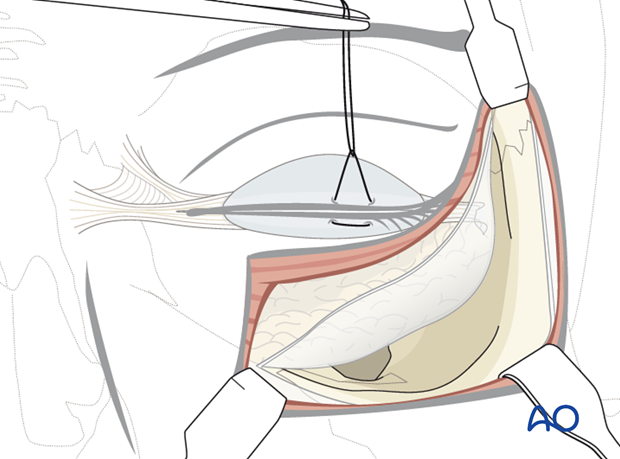 If the periorbita and the periosteum along the lateral orbital rim are exactly repositioned and sutured, a formal lateral canthopexy may not be necessary. The lateral canthal tendon will be brought back into its original position without postoperative alteration of the palpebral fissure.

Transcutaneous lower eyelid approaches may be complicated by vertical scar contraction during the healing period with an ectropion. Skin and septal scaring may be counteracted by so called Frost sutures.

This is a mattress suture through the Gray line of the lower lid and is applied at the end of the operation. It lengthens the lower eyelid when it is taped to the forehead. This creates traction for several days until the wound healing has passed its first critical phase. 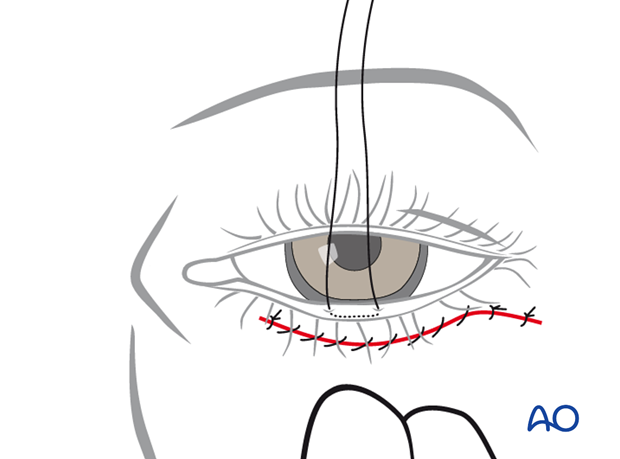 The taping to the forehead is done in several layers in order to suspend the suture firmly and prevent downward slippage.

The suture is positioned over a first layer of tape which is applied directly to the skin. It is then secured with a second tape over it.

Next, the suture is folded over this second layer and another strip of tape secures it finally. 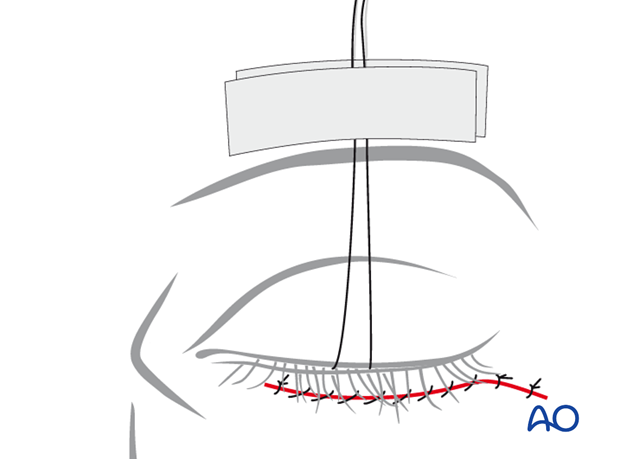 Postoperative examination of vision is possible by either removing the two uppermost layers of tape and opening both eyelids or by reflecting the upper eyelid only. 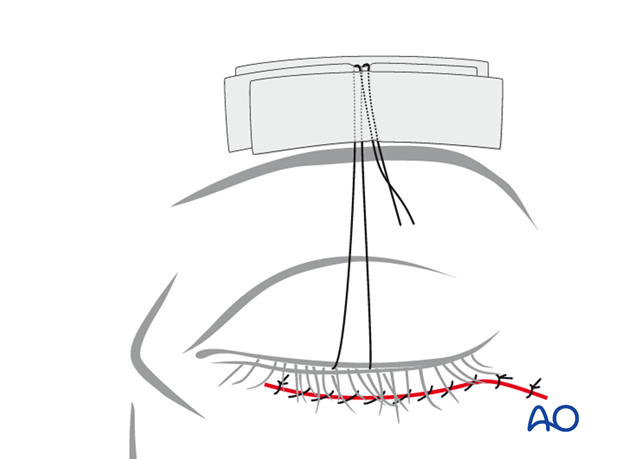